People often face difficulties in getting the answer to how many receptacles they can put on a 20 amp circuit since the 20 amp circuit is the most common in the US. If you are also looking for the correct answers to this particular question, then you’ve come to the right place.

This article will discuss circuits, receptacles, and other related topics regarding this issue. So, continue reading to get your answer and know all the essential things you should know about electric outlets and receptacles.

What is a receptacle?

Electrical receptacles are a type of AC-powered outlet. It is used for plugging a device into it. A receptacle is also known as a slot or series of slots linked to a wired AC-energy source. This receptacle can power electrical equipment and appliances by connecting them to the primary AC power source of a building.

A receptacle can be a switch that controls lights, fans, and air conditioning by powering them. These switches will also be counted as receptacles. 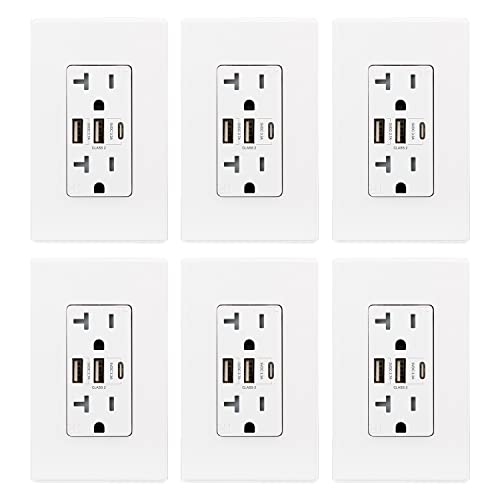 How many receptacles can be put on a 20 amp circuit?

All you need to know is you should never connect more than 20 amp worth of electric appliances on such a circuit. Practically, if you connect more powered devices than 20 amps to a 20 amp circuit, you create an electrical hazard, and the circuit can fire. I hope you understand. In that case, I will explain it in more detail. Focus on it.

First of all, you need to know that, The National Electrical Code does not prohibit you from placing receptacles on a 20 amp circuit. But if you run appliances that require more power than the circuit can handle, the circuit will be damaged.

The NEC says that a circuit can handle 80% of the load for which it is rated. So, if you follow the standard, you must not connect devices that need more than 16 amp because 80% of 20 amp is 16 amp.

There is an easy formula that you can use to convert amps into watts.

I’ll use 120 Volts because most of the rooms in the US-run 120 Volts circuits unless it’s a special case like a dryer.

The number of receptacles you can use:

Now that you know how to convert amp into watt, you can calculate and connect devices to a 20 amp circuit keeping in mind that you should not cross the limit of 16 amp or 1920 watts.

Now let’s have a look at a simple chart of devices where you will know how much watts or amp each standard device uses.

Let’s talk about a circuit in a living room. We usually need 2 to 3 LED bulbs, 1/2 of a ceiling fan, an outlet for our TV or an advanced surge protector power strip, or a multi-plug with numerous outlets to charge our Smartphones.

So if we count all the devices and calculate, we can see that we can put around 18/20 receptacles on a 20 amp circuit. But if we plug any coffee maker, microwave oven, refrigerator, toaster, or hairdryer into the outlet, then we must keep in mind that each of them uses around 800-1500 watts or approximately 6-12.5 Amps.

So what’s the solution now? Well, the answer is straightforward. All you need to do is, keep one or two separate 20 amp circuits on a wall in a room, or in the drawing-room, or kitchen where you can plug your refrigerator, microwave oven, and toaster. You can also install two circuits in your bathroom, where you will be able to plug your electric space heater and your hairdryer.

So, in general, you are allowed to put around 15 receptacles on a circuit in a living room. However, you may plug 1 or 2 receptacles that need more power than an average one or install two or more separate circuits in different walls to get the easy solution. Simple as that.

A 20 amp circuit breaker means a maximum of 20 amp (amperes) of current can flow through the circuit. 20 amp refers to the amp rating of the circuit.

Amp or ampere is the unit of measurement for current. So, a maximum of 20 amp current can safely flow through a 20 amp rated circuit, or the circuit can handle a maximum load of 20-ampere current.

However, according to NEC, a circuit can handle its 80% load capacity. We should never try to plug devices that need more than 16 amp current in a 20 amp circuit.

How to maintain it?

Every circuit needs wires to be connected with the primary power source. The size of the wires depends on the circuit’s load capability. For example, a 20 amp circuit should use 10 gauge or 12 gauge wire.

As a result, it will create electric hazards like overheating or potentially cause a fire and burn your circuit. Additionally, it can damage electric appliances connected to the circuit. So don’t use 14 gauge wire; instead, use 12 gauge wire when making a 20 amp circuit in your house.

To ensure that you won’t lose power if a breaker trips, your kitchen must have at least two outlets, each on its own circuit. The addition of lights to every circuit balances the load and eliminates the need for separate circuits for lighting.

However, you should have dedicated circuits in the kitchen for specific appliances like the dishwasher. Therefore, you cannot add anything else to the circuit — not even lights.

As long as you use 20 amp circuits throughout your home, you should know that they won’t handle a 100% load as they are rated. It can’t handle a constant flow of 2400 watts or 20 amp current. According to NEC, it can pass through 80% of the current load of its capacity, which is 1920 watts or 16 amps.

So, what can happen if you plug a toaster and a hairdryer in the same circuit at a time? Together, these two electric appliances consume around 2700 watts or 22.5 amps, which will cause your circuit breakers to trip.

Because the circuit can’t handle more than 16 amp current flow and you plugged in devices that need around 22.5 amps of current, the circuit face an overload that can create an electrical hazard. So for the circuit’s safety, the circuit breaker causes a trip and powers down the circuit.

What to do if the 20 Amp Circuit is Overloaded?

Having too many outlets on the same circuit may be an issue in an older home. You can also face issues like this and often face overload issues. So, now let’s find a convenient solution for this problem.

The first thing to do is unplug as many devices as you can from the outlets and refrain from using too many at once. There are, however, limitations to reducing amp draw through a circuit using that method.

To solve the problem of an overloaded 20 amp circuit, run a second wire from an independent breaker to take the other half of the load.

Let’s give you a real example of this problem.

Two bathroom circuits were connected to the same circuit in a home, resulting in an overload situation. The fact that the whole house was getting ready for morning baths in the morning and the use of hairdryers when wire nuts were melting created a dangerous situation.

The fix involved bringing an additional 12 gauge wire to one of the bathrooms and connecting it to a 20 amp breaker. As a result, the problem was immediately solved, and a much safer home environment was created.

Read: How to Fix a Loose Outlet [Easy Guide]

Can you put lights and Outlets on the same circuit?

The answer is, Yes. You can put 2/3 LED lights, 2/3 ceiling fans, and a single or two outlets on the same circuit. As far as we know, LED lights and ceiling fans use a minimal amount of amps so that you can have them on your circuit. But remember one thing, in the outlets on that particular circuit, you must not plug in a hairdryer and a toaster at the same time.

It’ll be good for you if you don’t plug any electric device that uses more than 8 amp of current into an outlet on such a circuit that has LED lights and ceiling fans connected to it. Otherwise, the circuit won’t handle the overload and can cause a fire at your house. Please keep this safety issue in mind at all times.

How many amps can a 20 amp outlet handle?

Do I need a 20 amp outlet in the kitchen?

So, you should have a 20 amp outlet in the kitchen if you want to use such appliances.

Can I put the dishwasher and fridge on the same circuit?

Certainly, the answer is a big No. First of all, you need to know how many amps or watts a fridge and dishwasher use.

So the solution is, you can put either a fridge or a dishwasher on a 20 amp circuit. But never try to put them together unless you want a big accident in your house.

If you ask me how many receptacles can be put on a 20 amp circuit, I will answer that. It depends on how much electric flow the receptacles need together. If you put 20 receptacles in the circuit and the combined electric use is less than 16 amps or 1920 watts, then you are allowed to do it. You don’t have to worry about anything.

But if you are using more powerful devices that use more watts, then you have to know how much watts they use and put them on the circuit accordingly. Besides, it would be best to remember what size wire you are using on the circuit. If you can keep all the above things in your mind, you must not face any electric difficulties in your home.